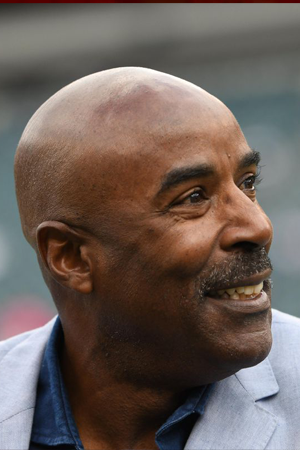 Mike Quick is a former NFL wide receiver who is proud to have spent his entire career with the Philadelphia Eagles. Of his many noteworthy accomplishments, he set the Eagles team record for longest TD reception — 99 yards — after catching a pass from QB and fellow MPG client Ron Jaworski in overtime to beat the Atlanta Falcons in 1985. This pivotal play also tied the league record for the longest receiving touchdown.

As a beloved former Eagle and current color commentator for the team’s radio broadcasts, a majority of Mike Quick’s life in sports has been associated with the team in some shape or form. He has no shortage of stories from not only his playing career but also his sportscasting career, including having the opportunity to call the Eagles’ first Super Bowl win in franchise history against the New England Patriots in 2018. His excellence in storytelling is part of what makes his popularity steadfast with not just Eagles fans but perseverant individuals who appreciate the experiences that former and current players alike have to share.

A product of Hamlet, NC, Quick would attend Richmond Senior High School in nearby Rockingham. He wouldn’t travel far to attend college, going to North Carolina State in Raleigh and becoming a star wideout at the school. Philadelphia would select him with their first-round pick in the 1982 draft. He would have immense success in only his second season in 1983, being selected to his first-ever Pro Bowl (the first of five consecutive selections from 1983 to 1987), as well as earning First-team All-Pro honors and becoming the NFL’s receiving yards leader for the season. He would also earn First-team All-Pro honors again in 1985 after eclipsing over 1200 yards. He would retire from a nine-year career in 1990 and later was inducted into the Philadelphia Eagles Hall of Fame. Currently, he provides his valuable insights for the Eagles’ radio broadcasts, alongside Merrill Reese, the longtime play-by-play voice of the Birds.

Mike Quick is an ideal choice to speak at practically whatever engagement one may be looking to plan considering his fantastic storytelling skills. His tremendous ability to encapsulate his career in sports is what has captivated audiences that Quick has spoken to. His value-added appearances present a huge opportunity to impress those a planner may be looking to entertain.

Fill out the form to find out when Mike Quick is available.