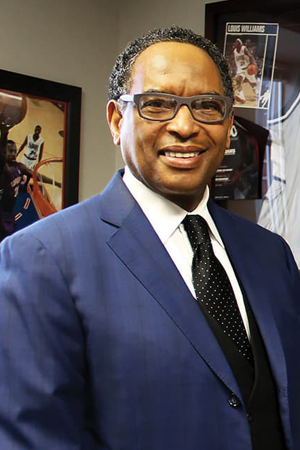 Reggie Wilkes is a legendary NFL linebacker who played for the Philadelphia Eagles and Atlanta Falcons. Among his many achievements, Wilkes was able to help lead the Eagles to Super Bowl XV in the 1980-81 season as starting outside linebacker. Following his career in the NFL, he would go on to a number of financial ventures, including bringing his financial services team to Janney Montgomery Scott, LLC as a specialist in the area of wealth management for prestigious professional athletes. Much of Wilkes’ speaking goes beyond his experiences in the NFL but focuses on diversity and inclusion as well, which are critical to any organization’s success.

Wilkes’ story begins at Georgia Tech, where he excelled not just as a player but also as a human being, having been recognized as a terrific student leader at the school. To commemorate this, he was granted membership into the ANAK Society, Georgia Tech’s prestigious honor society. Wilkes would get drafted by the Eagles in 1978, and along with fellow MPG speaker Bill Bergey, co-led the team in fumble recoveries with five. After a career with the Eagles that featured a Super Bowl appearance, he would finish his career with the Atlanta Falcons and retire in 1987. In 1989, he was inducted into the Georgia Tech Hall of Fame, and was later inducted into the Georgia Sports Hall of Fame in 2013. Today, he is an NFL Players Association Registered Player Financial Advisor.

Wilkes has had such a diverse set of experiences, which lends him credibility in discussing not only important topics of finance and money management for professional athletes but also the critical concepts of diversity and inclusion that all organizations are striving to achieve today. By immersing himself in these environments and with these topics, Reggie Wilkes is able to speak to any organization looking to gain more understanding and turn these ideas into practice.

Fill out the form to find out when Reggie Wilkes is available.