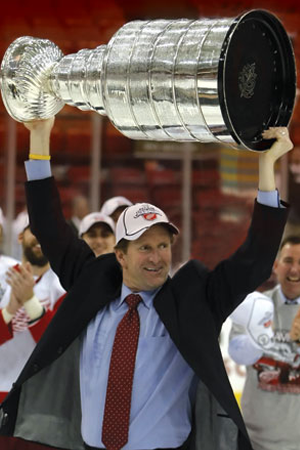 Former NHL coach Mike Babcock is the only coach in history to win an Olympic Gold Medal, a Stanley Cup, a World Championship Title, and a World Junior Championship. His illustrious coaching career spanned over 17 years in the NHL, including an incredibly impressive 10-year stay with the Detroit Red Wings. Today, he is regarded as one of the top keynote speakers in the sport industry.

In college, Mike played hockey for McGill University from 1983-87 before graduating with a degree in physical education. In 146 career games, he tallied a total of 107 points, was a 2-time all-star, served as team captain, and won the Bobby Bell trophy as team MVP. He went on to play for the Whitley Warriors of the British Hockey League.

Mike began his coaching career when he was hired by Red Deer College in Alberta, where he spent 3 seasons. He then spent the majority of the next 9 years as a head coach in the WHL for the Moose Jaw Warriors and the Spokane Chiefs, being named West Division Coach of the Year twice with the Chiefs. His impressive resume allowed him to then coach the Cincinnati Mighty Ducks of the AHL, where his team qualified for the playoffs in both seasons that he was there.

In 2002, Babcock was appointed as head coach of the NHL’s Mighty Ducks of Anaheim and took very little time to get adjusted, leading his team to the Stanley Cup Finals in his first season where they lost to the New Jersey Devils in 7 games. After a disappointing second season, he declined to return to the Ducks, and joined the Detroit Red Wings as their new head coach. While in Detroit, he led the Red Wings to the playoffs in each of his 10 seasons there, including 2 trips to the Stanley Cup Finals and a Stanley Cup Championship in 2007-08. His coaching career ended in 2020 after 5 seasons with the Toronto Maple Leafs, and he has since joined NBC as a NHL studio analyst.

Babcock’s coaching experience has given him plenty of insight on the ideas of vision, teamwork, destiny, and effort. He often speaks about how he instills his own virtues into the minds of his players, including discipline, heart, strength of will, and sportsmanship, and how those virtues should be used by everyone. His natural leadership and in-depth knowledge of the game has made him one of the most credible and inspirational coaches of all time.

Fill out the form to find out when Mike Babcock is available.