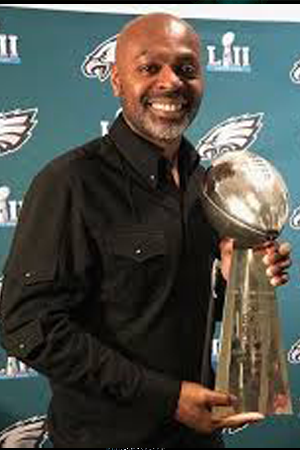 Fred Barnett is a legendary NFL wide receiver who played for the Philadelphia Eagles and Miami Dolphins. His break-out moment as a player came in 1992 when he was selected to the Pro Bowl as a Philadelphia Eagle. He was also on the receiving end of one of the longest plays in Eagles history, having caught a 95-yard TD pass from QB Randall Cunningham in a game against Buffalo in 1990.  Fred is now a sought after keynote speaker.

Fred Barnett is an inspiring keynote speaker for whatever occasion – corporate meetings, sports events, and business conferences. He has the ability to provide insight into the role that diversity and inclusion play in the efficient function of organizations, as well as the guidance for putting his insight into practice. Barnett has used his experiences from playing in the NFL to hone his craft as an adept storyteller for practically any audience.

A third-round pick out of Arkansas State (the same school that produced fellow MPG speaker Bill Bergey) in 1990, Barnett would go on to have an eight-year career with the Eagles, the team who drafted him, and then would later go on to spend a season in South Beach before retiring. His all-around athleticism and ability to run a sub 4.5 40-yard dash contributed heavily to his success and helped him make some terrific plays that are still remembered fondly today.

He continues to reside in the Philadelphia area where he has formed a personal relationship with Eagles fans and writes on what it takes to have success in a place like Philly. He loves interacting with fans through meet-and-greets and autograph signing. A life in sports such as the one Fred Barnett has made for himself has helped immensely in forming those bonds that so many look to create for themselves.

Fill out the form to find out when Fred Barnett is available.