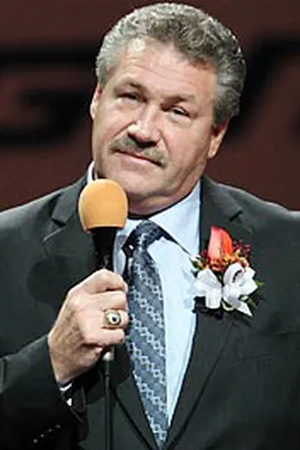 Dave “the Hammer” Schultz is a former professional ice hockey player who spent eleven years in the NHL. Among Schultz’s many achievements are the back-to-back Stanley Cups he won as a member of the Philadelphia Flyers in 1973-74 and 1974-75. He’s most notable for the enforcer role he played, helping his teams earn the legendary “Broad Street Bullies” moniker. During the championship season in 1974-75, Schultz set a record for penalty minutes in one season, 472, a record that he still holds to this day. That 472 mark still sits 63 minutes ahead of the second-most record all-time.

As an NHL keynote speaker, Dave Schultz has no shortage of astounding stories to tell regarding his time as an NHL’er, which makes him perhaps the best choice for any event that needs a keynote speaker, emcee and celebrity appearance. His storytelling abilities will make him a tremendous speaker for audiences of all sizes, from corporate to casual events.

Coming off a hot run in his junior career, Schultz bought his aggressive style of hockey to Philadelphia in 1971 and helped shape the Flyers into the rough and hard-nosed team that took two consecutive parades down Broad Street.

Along his ruthless journey, Schultz managed to score 20 goals for the Flyers from 1973-74. Following his retirement in 1980, he would go on to become not only a coach but a published author as well: The Hammer: Confessions of a Hockey Enforcer. He was inducted into the Flyers Hall of Fame in 2009.

Dave Schultz has carved his own success both on and off the ice. His life’s work has culminated into a treasury of courageous experiences in the spotlight that he draws upon for inspiration during his professional keynote speeches, making him the perfect candidate for providing a value-added experience to any event. The added benefits of his charismatic levity, meet and greet, and perhaps even an autograph make Dave an excellent emcee!

Fill out the form to find out when Dave Schultz is available.