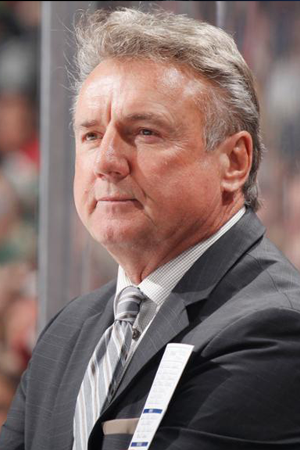 Rick Bowness is a former player and current coach in the National Hockey League. His lengthy career has placed him on the coaching staff of 8 different NHL teams, including a trip to the Stanley Cup Finals with the Dallas Stars in the 2019-2020 season.

Rick’s playing career began in 1972 when he joined the Quebec Remparts of the Quebec Major Junior Hockey League. After a few seasons with multiple teams in the league, he gained a lot of NHL attraction. Eventually, the Atlanta Flames drafted him in the second round of the 1975. He would go on to play 9 seasons of professional hockey. In that time, he saw NHL action with the Flames, Detroit Red Wings, St. Louis Blues, and Winnipeg Jets, AHL action with the Nova Scotia Voyageurs and Sherbrooke Jets, and CHL action with the Tulsa Oilers and Salt Lake Golden Eagles. His transition to coaching came in the 1982-83 season when he became a player-coach for the Sherbrooke Jets. Afterwards, he signed on as an assistant coach for the NHL’s Winnipeg Jets following his retirement from hockey in 1984.

Rick Bowness’s Career in the NHL

The last 37 years have seen Bowness in a variety of coaching roles with an array of different teams. He spent 4 seasons head coaching in the AHL with the Moncton Hawks and the Maine Mariners. Since then, the rest has been spent in the NHL, obtaining head coaching positions with the Ottawa Senators, New York Islanders, Phoenix Coyotes, and most recently, the Dallas Stars. Aside from the Senators, he began his time with each NHL team as either an assistant or associate coach. This included a 5-year stint as associate coach of the Tampa Bay Lightning. Now, following his best coaching season to date with the Stars, Rick will look to continue his success and hopes to bring Dallas to another Stanley Cup Finals.

Rick’s 30+ years of coaching experience has made him an expert in all things leadership and motivation. His insights involving time management, teamwork, resilience, and coaching are have the power to change an individual’s mindset on life in general, as well as time spent in the workplace or in a team setting, and will often leave an audience feeling revitalized and ready to take action.

Fill out the form to find out when Rick Bowness is available.