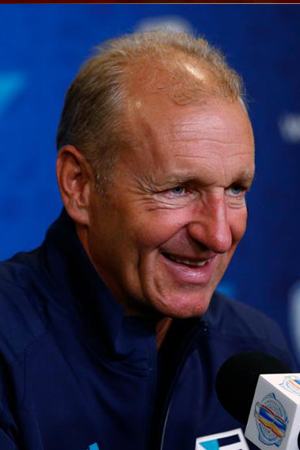 Ralph Krueger is a former hockey player, sport and business executive, and current head coach of the Buffalo Sabres in the NHL. Described as a “pure genius” in his approach to coaching, he was also the head coach of the Swiss Men’s National Ice Hockey Team from 1997-2010. As a professional competitor in multiple sports for countries across the globe, Ralph Krueger is one of the most versatile and effective keynote speakers.

Ralph spent the majority of his hockey playing days with a variety of teams in the German Bundesliga Hockey League. After 2 seasons playing in the WHL, he joined Düsseldorfer EG in 1979 and was an immediate force on the ice. Over 7 seasons in the Bundesliga, he played 350 matches, accumulating 187 goals and 186 assists throughout his career, and leading the league in points during the 1980-81 season. He was also a member of the West German National Team, playing 45 games with the team as a player.

Krueger’s switch to coaching came in 1989 when he signed on as an assistant coach for Buisburg SC in the 2nd Bundesliga League. He then landed the head coaching position with VEU Feldkirch of the Austrian Hockey League, where between 1994 and 1998, he led the team to 5 straight Austrian championships, including a 1998 victory in the European Hockey League championship, a league made up of the champions of various European leagues. His great success with Feldkirch created the opportunity to become the full-time head coach of the Swiss National Team, a position he assumed in 1998. He would spend 12 years with the national team, bringing them to the Olympic Games 3 times (2002, 2006, and 2010), as well as 12 appearances in the Ice Hockey World Championships.

Ralph would later spend one season as head coach of the NHL’s Edmonton Oilers in 2012 before making an important career change. In 2014, he made the switch from ice hockey soccer as he became the Director of Southampton FC of the English Premier League. Soon after his hiring, he was promoted to Chairman of the club, a position he held for 4 years until he was released in April of 2019. Still having plenty more coaching to offer, Krueger returned to the NHL prior to the 2019 season as head coach of the Buffalo Sabres, where he currently is to today.

Ralph’s unique career has allowed him to experience aspects of the sport industry that most never experience. Described as a great communicator, positive thinker, and a motivator, he authored his book, Teamlife – Beyond Setbacks to Success, which became a bestseller, and uses his insights to coach his audiences on the power of efficient leadership and its translation from sport to business, the idea of working without fear, and the ability to have trust in your teammates or co-workers alike.

Fill out the form to find out when Ralph Krueger is available.