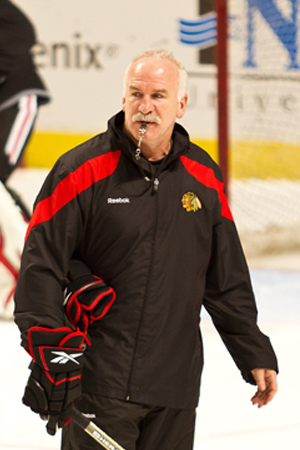 Quenneville’s expertise in the areas of motivation, team development, and coaching serve a huge benefit to any organization interested in booking someone with tremendous experience in maintaining a winning culture – coaches and fans alike.

Upon retiring from a fourteen-year NHL career as a player in 1992, Quenneville went into coaching four years later, helping the newly-relocated Colorado Avalanche win its first Stanley Cup in franchise history in 1996. Later that same year, Quenneville became the head coach of the St. Louis Blues, helping lead them to seven consecutive playoff appearances. For his valiant coaching efforts during the 1999-2000 season, he also won the Jack Adams award for best head coach in the league. His journey would eventually lead him to Chicago in 2009, where he earned his first Stanley Cup as a head coach in 2010 while also breaking the franchise’s then-49-year Cup drought. He would win two more Cups during his time as head coach of the Blackhawks in 2013 and 2015. After becoming the head coach of the Florida Panthers in 2019, Quenneville would lead the team to its first playoff appearance in four years.

Quenneville is widely regarded as one of the greatest head coaches in NHL history. His ability to motivate players to look to achieve something much bigger than themselves is a testament to his skills as a motivator and a team-builder, critical skills needed not just on the rink but also in life. He is a proven winner with championship experience, a kind of experience that is invaluable to any kind of culture one may be trying to build within their organization, regardless of the business.

Fill out the form to find out when Joel Quenneville is available.