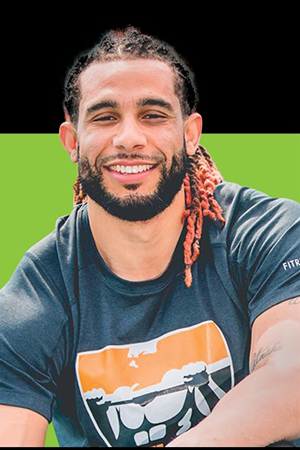 Evan Harden is a wellness speaker, motivational speaker and corporate group fitness instructor; as well as a gun violence survivor. He is the ultimate under-dog role model, perfect for inspiring youth audiences and empowering non-profit organizations. Today, he concentrates on motivating others through his keynote speech, personal training and community organizing.

Sometimes, the best speakers to book are the ones just exploding onto the scene. That speaker is Evan Harden, the entrepreneur and community activist who’s about to become a national name as a speaker and storyteller.

Growing up in Philadelphia, Harden was shot in the back at age 16. He could have been paralyzed. Instead, he turned that random act of violence into the motivator that has fueled his entire career.

Harden has one guiding philosophy: if you want to succeed, you must be your own superhero. Adversity can become the opportunity to push yourself beyond your limits, achieving greater heights than you ever imagined.

It’s a valuable lesson to learn in any context, and few are better able to convey it than Philadelphia’s #1 calisthenics coach. During the 2020 Coronavirus pandemic, Evan is challenging himself to do 1,000 pushups every day, sharing his mentality of overcoming and pushing aside obstacles with his thousands of social media followers.

To call Harden a motivational speaker doesn’t quite do his qualifications justice. He’s an inspirational storyteller, able to transfer his experience and strength into action in both his community and to anyone he speaks with.

He’s already a legend in the Philadelphia area as a community activist for health and wellness and an Anti Defamation League committee member of the Philadelphia Chapter. He’s the founder of the National Bar League, and has been featured in countless local and regional TV interviews and publications. Nationally, he made noise starring in a New Balance commercial to tell his story and showcase his passion.

His traumatic incident at age 16 inspires him. His city pushes him to give back. His father, who received an award by Pres. George Bush for his USDA work with proteins, has created a path to follow. But it’s Harden’s unique combination of drive and tenacity coupled with extreme kindness and gentleness that make an impact.

Now, it’s time to bring his knowledge and enthusiasm into your business. From corporate wellness directors and community groups to non-profits and schools, his message resonates with all of his audiences. Beyond resonating, it drive them to action. What more could you want in a motivational speaker? Book Evan Harden today to motivate and inspire the attendees of your next event.

Fill out the form to find out when Evan Harden is available.