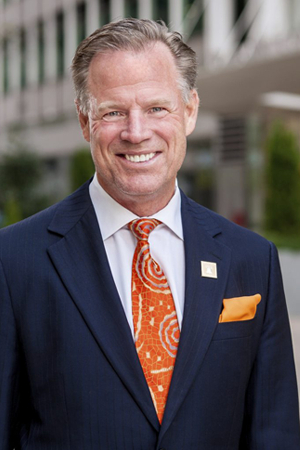 Legendary NHL-alum Brian Propp is widely considered to be one of the best left-wingers in the history of the sport. During his 15 incredible seasons in the NHL he received 21 different awards and netted over 1,000 points.

Following his career, he proved resilient, overcoming a debilitating stroke and becoming the Director of Strategic Relationships at Wolf Commercial Real Estate. Propp brings his sports and business experiences to his extraordinary keynote and motivational speeches.

Brian’s playing career began with the Melville Millionaires of the SJHL in 1974, where he scored 75 goals in just 57 games, easily breaking the previous scoring record of the league. Noting his massive potential, he moved up to a higher level of play with the Brandon Wheat Kings of the WHL from 1976-1979. There, he managed to win the league scoring title in 2 of his 3 seasons, putting himself in a great position to gain way into the NHL.

Propp has excelled at staying head-strong since the start of his career, a principle that he imparts to his audiences in his keynote speeches.

Propp was drafted 14th overall by the Philadelphia Flyers in the 1979 NHL Entry Draft and immediately demonstrated that he would be a dominating force in the NHL, scoring the game-winning goal in his first career game. He would go on to play 10 full seasons for the Flyers, making the playoffs in all 10 of those seasons, including 3 trips to the Stanley Cup Finals.

Following his paramount career with the Flyers, Brian spent his final 5 seasons in the NHL with the Boston Bruins, Minnesota North Stars, and the Hartford Whalers, making it to the Stanley Cup Finals 2 more times. Additionally, he won the Canada Cup in 1987 with the Canadian National Team.  The 5-time NHL All-Star with over 1,000 games under his belt knows how to ignite an audience with the same flame that had encouraged himself over the years.

After experiencing a life-threatening stroke in September of 2015, Brian had to relearn how to speak and move, learning first-hand how much fortitude and resolve it takes to recover from such a calamity.

He encourages his audiences to always optimize opportunities that are presented and to always strive to be the best, no matter what steps in your way. Now as the Director of Strategic Relationships for Wolf Commercial Real Estate, Brian will never take “no” for an answer!

Fill out the form to find out when Brian Propp is available.